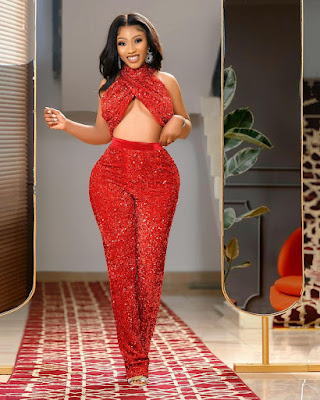 In a video shared, Mercy was spotted eating amala with a spoon and her reaction to the taste of the food was disappointing.

Some Nigerians have regarded her actions as a felony to the Nigerian food culture, stating eating the food with a spoon is already a disrespect. While some demanded to know the person that almost finished the food before she took over the remnants.

@lil_master__ wrote: After ya almost done with it😂😂 ya nw spoiling ur mouth

@ijayss_gram wrote: There’s lots of igbo people that have never tasted amala so don’t judge her.

@_titi_th wrote: Wait o who been chop the Amala reach that level before you start to video???🙄🙄🙄

Influencer declared wanted for p*uring a corr*sive substance on her boyfriend’s 2nd lover. An influencer identified as Maris, is currently on the run after p*uring a corr*sive substance on her rival, Eromonsele Hallowbe, leaving her writhing in pains and her skin d*maged. It was gathered that the incident happened on Friday, September 17, in Lagos. […]

Grammy award-winner, Ayodeji ‘Wizkid‘ Balogun has celebrated his fellow Grammy winner, Burna Boy ahead of his Twice As Tall concert in London. This is coming following the anticipation of Burna Boy’s Twice As Tall UK tour holding on Friday, August 27, 2021, at London’s O2 Arena. Taking to the Instagram story to shower praises on […]

Nollywood actress, Nkechi Blessing, has recounted how her own sister arranged with her boyfriend to confirm if she was a virgin.   The actress made this startling revelation in an interview with blogger, Chude Jideonwo. Nkechi Blessing stated that her personal experience was the reason she felt so strongly about the whole Baba Ijesha rape saga. […]