Trouble started after Gedoni took to his Instagram page to share a photo of himself at a beach and questioned his fans and followers about their weekend.

Gedoni added he’s the son of God and father of a baby boy. He captioned the post: How’s your weekend going? It’s a beach day for me Godpikin # papabomboy

Reacting to the post, Kemi Olunloyo questioned Gedoni on how he is coping with fatherhood, especially at night, describing the son of the reality TV star as her grandson. 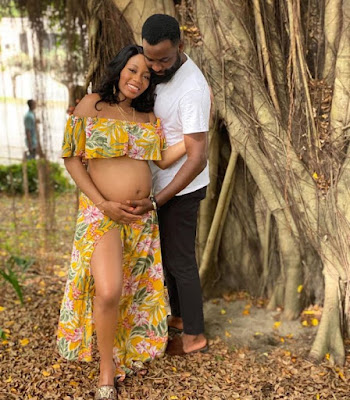 Gedoni, who felt displeased, blasts Kemi Olunloyo, saying his son is not Kemi Olunloyo’s grandson. See the conversation below

kemiolunloyo wrote: @gedoni how market. You don enter overnight shift with my grandson

Kemi Filani News recalls that Gedoni and Khafi have welcomed their first child together a few weeks ago.

In a post shared on Instagram, Gedoni expressed appreciation to God, stating he feels so blessed that God found him and his wife, Khafi, worthy to nurture and raise a child.

He wrote; What a feeling.. “My world in one frame” ( now I can relate to this saying). I feel so blessed that God found us worthy to nurture and raise one of His very own. Grateful heart God pikin. 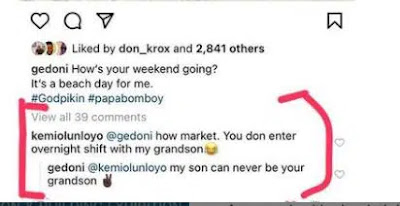 Nollywood actress Mercy Aigbe stunned many of her fans with some recent photos of herself.   Mercy Aigbe posed as a man in the photos as she had tribal marks and beards on her face making it hard to recognise her. The talented actress also revealed she would break a lot of women’s hearts if she were a man. […]

Nigerian billionaire kids, DJ Cuppy and Kiddwaya’s friendship, appears to have hit a sour note going by a trending video on social media. In the clip making the rounds, Kidd was seen candidly advising Cuppy on the character traits she needed to let go of to find a man. According to the BBNaija star, […]