From the snippet of visuals he made available to his fans via Instagram, one could see a nurse attending to the actor during which she checked if the drip was functioning properly while taking care of his wounds as well. 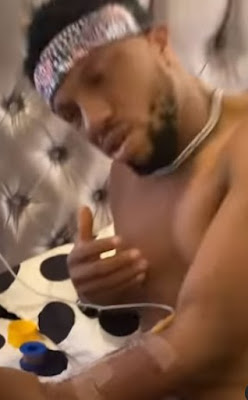 2Pac informed his followers that he is down with malaria and typhoid fever as he asks for prayers from his numerous fan, but of course not without a shred of his drama and Americanised accent.

“Here in NIGERIA it’s all malaria typhoid typa shit.. this Shit don’t happen to me when am in CALIFORNAYEH .. now y’all say a word of prayer to a Nigga doing good ❤️:

”Arin and aggressive kissing” – Reactions as she kisses Jaypaul (Video)

Part of the highlight from the BBNaija house over the weekend was the moment Arin kissed Jaypaul.   This happened during a game of truth and dare as she was dared to pick any male housemate and kiss him for at least 10 seconds. Arin chose Jaypaul, who she kissed passionately as Cross was doing the counting. […]

Popular Nigerian singer, Davido’s 4-year-old daughter, Hailey Adeleke was recently spotted in a video shared on social media dancing to Cardi B’s song. The proud father of three on sighting his little girl display such amazing dance skill screamed in excitement. Sharing the video which captured the adorable moment he wrote, “See my daughter oooo”. Watch video below, This is […]

Bobrisky at 30: Crossdresser Shares 1st Look Out of the 5 He Splurged N7m On for Birthday

Bobrisky at 30: Crossdresser Shares 1st Look Out of the 5 He Splurged N7m On for BirthdayThe crossdresser has been dropping hints on social media about how his 30th birthday at the end of August would go down. As part of his preparation, he disclosed that he would be spending over N7 million on his […]