A 38-year-old Nigerian man, Salau Abdulmalik Femi has been arrested after he allegedly hacked into the server of a bank to steal N1.87 billion. 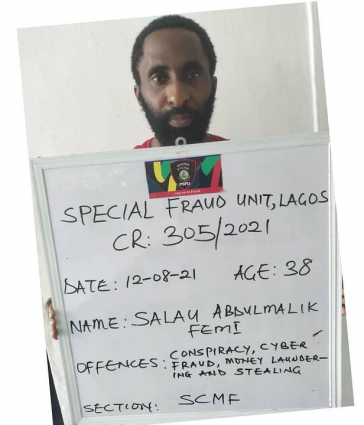 Femi who was arrested by detectives from the Special Fraud Unit (SFU) of the Nigeria Police Force (NPF) is said to be the kingpin of a syndicate that specializes in hacking into the servers of banks and corporate agencies.

He was arrested after he allegedly hacked the Flex-Cube Universal Banking System (FCUBS) of a first-generation bank.

The spokesman of the Special Fraud Unt, Ikoyi, Lagos, DSP Eyitayo Johnson, in a statement, disclosed that the the suspect created fictitious credits totaling N1.87bn on the accounts of three of the bank’s customers, using application software.

According to him, the unit while acting swiftly on a petition from the bank, contacted the Central Bank of Nigeria (CBN) and the deposit money banks which customers were beneficiaries of the fraudulent funds and that in the process was able to salvage a substantial amount.

“Items recovered from the suspect include an Apple laptop and an iPhone. He and operators of some Bureau De Change (BDC) who used to launder the monies will be charged to court as soon as investigation is concluded,” he said.

#BBNaija: “i want you to Fvck me” – Drunk Liquorose wants to R*pe Emmanuel After Jacuzzi Party [Video]

Big Brother Naija ‘Shine Ya Eyes’ housemate, Emmanuel, has confessed his love for a fellow contestant, Liquorose. Although some of the housemates believe that Pere and Saga are pushing Emmanuel into a relationship with Liquorose, He later told Biggie that he is actually falling in love.During his Diary Session on Friday, Emmanuel was asked if he was developing feelings for any female housemate. And in response, […]

How Mide Martins’s husband, Afeez Owo allegedly cheated on her with her best friend, Zanzee

A story of how Nollywood actor, Afeez Owo allegedly cheated on his wife, Mide Martins with her best friend, Afeez Owo cheated several times on Mide with Zanzee who is a popular cloth vendor on Instagram. Mide Martins and Afeez Owo It was also disclosed that Mide stopped bring friends with Zanzee after she did […]

A Nigerian man believed to be under the influence of Alcohol has claimed to be the real father of Wizkid saying he would never forgive him for abandoning him his real father. According to the man who seems to have drunk so much alcohol, Wizkid is his son and he’s a Delta boy and […]