Nollywood actress Toyin Abraham has shared a video of a pastor praying for her at her movie premiere ‘The Ghost and the Tout’, which took place on Friday, 10th September.

This comes amidst the several criticisms trailing the new movie and her style of production on social media.

Toyin Abraham’s new movie ‘The Ghost and the Tout’ sparked outrage online after a blogger said the film is not recommended for intelligent minds while advising movie lovers to stick to ‘Omo Ghetto the Saga’ on Netflix.

With the several social media brawls, Toyin Abraham is more focused on promoting her movie than responding to critics and trolls. 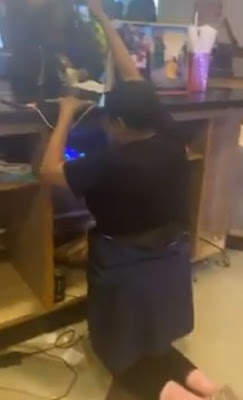 The video on her Instagram page captured Toyin Abraham kneeling while a pastor was praying for her.

Toyin Abraham, who seemed overwhelmed with the gesture, said many fans loved the new movie to the point that a pastor prayed for her.

She captioned the video: So they love the ghost and the tout part two to the level that a pastor prayed for me.

The comment from Iyabo Ojo has sparked numerous reactions of those who believe she is creating a drama for no reason.

The camp of OBO, Davido has been hit with yet another scandal after it has been alleged that Davido and his hypeman, Special Spesh are not cool as they used to relate with each other. According to Instagram blogger Cutie_Julls, Special Spesh has withdrawn himself from Davido’s team for a while now and Davido has refrained […]

BBNaija season 6 housemate, Angel was singing a ‘remixed’ version of “Koroba”, a song by Nigerian singer, Tiwa Savage, and her fellow housemate, Whitemoney, wasn’t too pleased. When the song was released in 2020, Tiwa Savage came under heavy backlash as some netizens claimed she was promoting prostitution with the song. However, the singer came out to dismiss […]

“Another one on the way” – Singer, Davido hint fans on plans to acquire a new car as he prepares to ship his Rolls Royce down to Nigeria (Video)

Superstar crooner, Davido has disclosed his plans of acquiring a new car as he prepares to ship his multi-million naira Rolls Royce down to Nigeria.   The music star could be seen in a video with a young lady whom he claims to have contracted to do the shipping for him. Davido however didn’t end the video […]