Actress Nkechi Blessing Sunday has called out some Directors in the Yoruba movie industry who enjoy casting female characters for lead roles and not paying them any fee, all in the name of giving them fame.

The controversial actress who is known for clout chasing on Instagram, revealed this in a recent chat with Chude Jideonwo while reflecting on the Baba Ijesha rape scandal.

According to her, many of the male directors in the Yoruba movie industry will authoritatively tell you with their full chest to either sleep with them before you casted for a lead role in their movies or you forget it. 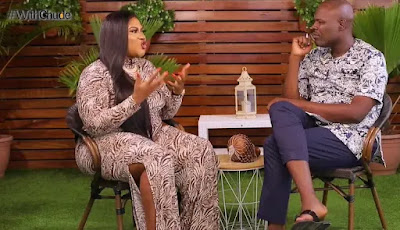 “At first when I heard the Baba Ijesha case, we didn’t know it was Comedian Princess that was involved until i watched her live video on Instagram when she narrated how it happened.

Before then, many people had been tagging Mr Latin, the TAMPAN leader to say and do something but he kept mum, so I spoke out too. and said with my full chest that the industry was useless…I had blocked Damola Olatunji on my WhatsApp, he is a director and i told them all that any director that will not pay me my money before casting me for my roles, i am not doing…..i am not working for fame but money and ..i guess he has personal issues with me cos he is one of such directors…

It wasn’t until the Noise became loud that Mr LATIN released a video to say he couldn’t take action against Baba Ijesha because he is not part of the association…but the real reason they couldn’t talk is because if one of them comes out to talk, all their victims will come out and call them out….that is why they are quiet cos in one way or the other the are guilty, they tell you with their full chest, if you don’t sleep with them you can’t get this lead role”

Kemi Filani recalls that Odunlade Actor, a popular actor was recently exposed for allegedly always sleeping with young females before casting them for movie roles. He denied it however.

Even though some housemates were nominated for eviction, the drama in the BBNaija house continued last night. One of the show’s highlights on Monday night was when Pere and Beatrice were seen on camera kissing passionately. This took place during the truth or dare game anchored by Tega. During the game, Pere was dared to kiss Beatrice for eighteen […]

Big Brother Naija shine ya eye housemate, Tega has revealed that she felt bad that 21-year-old Angel disrespected her close friend The one time close pals, Angel and Boma had a heated verbal argument on Thursday evening, September 2nd. Boma confronted Angel for allegedly telling people he’s a kiss and tell, which led to an exchange of […]

Popular Nigerian exotic dancer, Jane Mena appears to have reacted to the seemingly perceived notion that she’s had something to do with Nollywood actress Tonto Dikeh’s new lover, Prince Kpokpogri. An update by a popular controversial blog that’s solely aimed at generating controversial gossips, recently placed Jane Mena’s photo alongside another photo of Prince with a suggestive caption… […]