Kemi Filani News recalls that the Popular Nigerian event planner, Diekolola Osa Avielele who was married to Emmanuel Osa Avielele, a top Manager in Union Bank, died in July 18, 2021 a week after welcoming her son in Fairfax, Virginia, United States.

For 10 good years, top lawyer and events guru, Diekolola Olatanwa Osa-Avielele waited on the Lord for the fruit of the womb. After a decade of trusting, she conceived and finally had her own baby in the United States but died a week after he arrived. 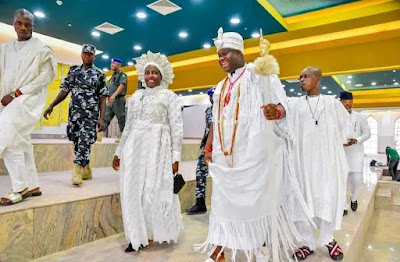 Rev Esther Ajayi in a recent with City People, gave a detailed account of how her new church cathedral in Lekki was built after purchasing the land from Emmanuel Osa Avielele, husband of the late event planner, Diekola.

“It is God’s doing, I have never seen that type of Grace before. God really favoured me. There’s a woman who is looking up to the lord for the fruit of the womb. Though she’s late now, she died in June last year. She came to me in London. Her husband is a top Manager in Union Bank. Her husband brought her to me in London. I prayed for her and told her she was going to give birth to a baby boy called Samuel.”

“Truly, she gave birth to the boy and named him Samuel. When She conceived the pregnancy, They were attending Mountain of Fire church. As her delivery time was approaching, I was taking care of her. I then warned that God said she should not to travel to America aside from the fact that there was COVID. She and her husband agreed with me and left. When they got home her sister misled them to travel out of the country.

“In fact, her husband is still pained to date. She was advised that there are standard facilities in America and being her first child, she should not give any chance for failure.”

“I gave her the prophecy that she would give birth to a child 2years before she got pregnant. She went to America, gave birth to a baby boy and named him Samuel. I think one of the nurses that took her delivery had Coronavirus and got her infected. Then she got complications. She gave birth to the child on the 7th, the naming of the child was done on 14th and she died on the 18th. I was so dumbfounded because it was strange to me.”

“You see what not yielding to warnings has caused her. There’s no how-to mingle with people of the white garment that you won’t get revelations to guide you. Her husband is the one taking care of little Samuel. He brought me to this land. The last time he came to me in London saying he has an event Centre he wanted me to sanctify. He complained that whenever an event is to hold on it, there is always one hitch or the other disrupting the event. I told him that no problem whenever I come to Nigeria we will address that.”

“So in 2016, I came home to sanctify the place. I was about to go when he called my attention to the empty land beside the event. It was a large expanse of land. He complained that those that leased it to him were cheating him. Whatever returns that came were shared between him and them. And he hardly did anything on the land and he still paid for the lease. He said helpers like you could buy this land and use it well.

“I bent down and took a hand full of sand. I read the book of Samuel 24 on it. After doing that, I put a call through to Rev. Mike Murdock of Wisdom Centre; I called him; Baba, I’m on land. I want you to pray for me that God should assist me to get it. He started praying and speaking in tongues. I also called the man in Ogbomoso and his second. We prayed over it then I returned the sand.”

“On the second or third day, I went back to London. By the time I got to London, those that bought my church in London, though her husband was none believer, I was still working on making them believers. The husband had a dream he built a church for me beside the sea in my country. I had already seen a land here. But how do I tell them I have seen a land after they built a 5.2 million pounds church for me in London. I didn’t know how to tell them except for God’s intervention. But I told them I have seen something like that in my country. The wife told her husband that it has to be what God was revealing to him in his dream.”

“That was how they gave me the money to build the church. They requested I get competent hands to help erect the edifice you are seeing today. With the wonderful ways God has assisted me to build this place, no one can confuse me that there’s no God. That’s how I got here. Nobody knows there’s going to be COVID. They gave me the whole money to complete the church to avoid any hindrance. The builders have done their estimations and drawings. So it is God that built this place. It was an uncommon grace I got from Jesus. Sometimes I get overwhelmed because it’s beyond my imagination.”

Reverend Ajayi’s new Cathedral church and world-class edifice is a marvellous structure and a beauty to behold. It is sited in a serene environment, looking elegant and classic at that highbrow area of Victoria Island Extension.

“No successful person has ever been successful without failure” – Actor, Alex Ekubo

Popular Nollywood actor and model, Alex Ekubo has shared his understanding of success with his fans and over 4 million Instagram follower. The actor who recently bagged a honorary doctorate degree in a varsity in Cotonou, Benin Republic, noted that success comes with a price. According to him, there’s no successful person in the world who has […]

Viewers who have been observant have come to the conclusion that this set of Big Brother Naija housemates are the dirtiest ever seen in the house. @glitz Cynthia took to her Twitter account to make this submission. She tweeted; “I think this is the dirtiest we have ever seen #bbnaija house… I mean this set of housemates […]