CRISTIANO RONALDO’S mum was spotted in tears at Old Trafford as her son scored twice on his Manchester United return.

The Portuguese ace scored either side of half-time against Newcastle to cap a perfect homecoming and it was all a little too much for his mother Dolores Aveiro.

The goal was one of the easiest Ronnie will ever score but the Old Trafford crowd – some of whom turned up more than two hours early – did not care.

And he added another just 17 minutes after the break as he put United ahead for the second time in the 4-1 win. 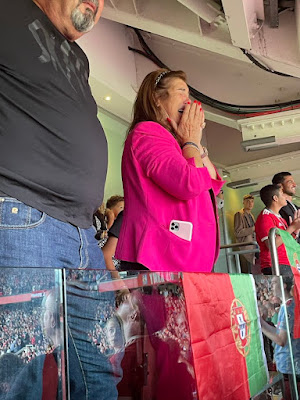 His two strikes put the Portuguese on 120 United goals and his mum Dolores was overcome with emotion.

A picture appearing to show the 66-year-old crying at Old Trafford was posted on Twitter.

Ambo_91 shared the snap and wrote: “Ronaldo’s Mum behind me after him scoring, my heart cannot cope.”

Man United legend Neville Makes Title Prediction After Ronaldo’s Return, Sends Chelsea, Man City Warning :Gary Neville has backed Man United to challenge for the Premier League title after the sensational re-signing of Cristiano Ronaldo. Cristiano Ronaldo had a successful career at Old Trafford that saw him win a number of titles including his first […]

La Liga giants, Barcelona, has confirmed that Ansu Fati will wear the number 10 jersey for the Catalonia club. This comes after Messi, who previously wore the jersey number left Barcelona for Paris Saint Germain, in July 2021 due to financial fair play rule in Spain. Barcelona announced the news on its official website on Wednesday, September 2021. Fati […]

Inside Cristiano Ronaldo’s Stunning Multi-Million Manchester Mansion Cristiano Ronaldo has reportedly set up home in a multi-million-pound mansion in Manchester where he will be staying following his return to Old Trafford. Ronaldo rejoined Man United in the summer from Juventus, nearly 12 years after he left the club for Real Madrid. SunSport reports the five-time […]