Fans of Whitemoney, a housemate on Big Brother Naija, have gone wild after his Instagram page, which had over 700k followers disabled by Instagram.

His Instagram handler revealed that the page is being reviewed through his backup account. He urged his fans to engage with the backup page for the time being. 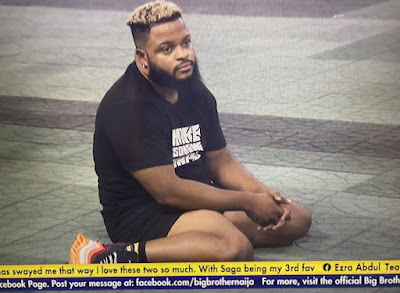 “We are working on our Main Account @whitemoney__ let’s all stay calm MoneyGeng ✊. It’s under review by Instagram ✊

FOR NOW, WE’LL STAY ACTIVE ON THIS BACKUP PAGE”, the handler said,

Meanwhile, fans of Whitemoney have come to a sudden conclusion that the page was disabled by the actions of the fans of Pere. According to them, Pere’s fans have reported Whitemoney’s page.

“Pere’s fans planned to do this in their WhatsApp groups, I hope they’re very happy now, dark hearts just like their favourite pere”

“Will this one stop me from voting my mazI?”

“Pere fans did it, they reported the page, they all agreed to do that on their telegram group„ bitter fans like their mentor, „u think reporting the page will change anything? U people have faileD. white money is above u all”

In other news, Pere, a BBNaija housemate, expressed his unhappiness by claiming that his fellow Housemates have a practice of hoarding food that is supposed to be freely available in the house.

During his diary session today, he stated that he felt okay when he woke up this morning, but that he became upset later.

“I woke up feeling good but now I’m angry because I am discovered that housemates are hiding foods that are meant to be free in the house”, he said.

He also expressed surprise that Jaypaul couldn’t survive eviction. He added that Jaypaul is a young man that is very talented.

A Nigerian commercial s£x worker has highlighted the benefits she derives from plying her trade. The lady whose identity was not obtained at the time of filing this report revealed in a video sighted by GhGossip that she is happy doing prostitution and she is not ashamed to go public about her business that puts […]

Popular Nigerian Dancer, Korra Obidi, has taken to her social meedia page to lament over the cost of being an adult in today’s world. The dancer who is married and currently based in the US, juxtaposed the high cost of living abroad, and she came to the conclusion that it is indeed, very hard. She […]

The female contestants were introduced tonight and here is a list of female housemates that made it into the house: 1. Angel Angel It’s ladies night and the first lady to enter #BBNaija Shine Ya Eye is Angel. Adorned with 11 tattoos, Angel says that what you give is what you get. 2. Peace […]