#BBNaija: Moment Cross falls from his bed to Angel’s bed as a result of being drunk (Video) - Funnylord
Skip to content

The Saturday night party really took a toll on the housemates, with alcohol being the driving force of all the show.

In a previous report, Pere was caught displaying his sexual prowess on Jackie B which ignited heat on the social media space. 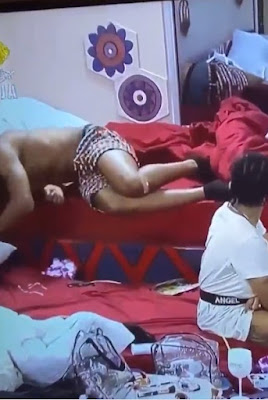 Subsequently, Cross who apparently took his euphoria to the extreme last night, 14th August was spotted trying to get down from his bed, but unfortunately, he fell onto Angel’s bed.

Trying to get hold of himself, he managed to raise up but fell again, which prompted fellow housemate, Sammie to come to his rescue. Angel on her part, also tried to get hold of Cross.

Fifteen sex workers, who encountered a life changing moment at the Christ Mercyland Deliverance Ministry, Warri have recounted horrible experiences they face as Billionaire Prophet, Jeremiah Fufeyin splashed N15m on humanity. In a video shared on the internet and watched by this medium, the founder of the church, Fufeyin had during a church service asked people engaged […]

Members of the popular Nigerian dance crew, Girls Got Bold (GGB) and ace music producer, Don Jazzy are giving fans some good vibes to ponder on. The GGB crew consists of three young ladies who have appeared in top musical videos as dancers and vixens. They have also performed at top shows and concerts locally […]

Former Big Brother Naija housemate, Dorathy Bachor has taken to social media to cry out bitterly after some Economic and Financial Crime Commission Officers (EFCC) broke into her house while searching for a suspected internet fraudster. Dorathy Bachor disclosed that this incident took place early this morning at about 4.45am in her own apartment. The […]