Nini and Cross were engaged in a heated argument that resulted in insults between the duo.see post below

While housemates tried to settle the rift between the both of them, neither Nini nor Cross were accepting it. Saga was also seen trying to get a hold of Nini. 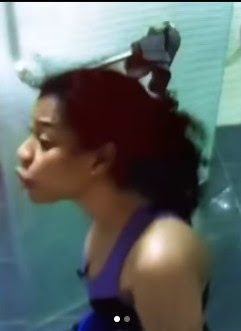 Well, Nini in the course of the argument told Cross that he’s big yet with the smallest brain.

“As big as you are, the smallest thing in your body is your brain. That’s if you have anyone. f*cking id*ot.“, she said to him.

“Finally with the boo” – Actress, Bimpe Oyebade shares photo of her with mystery lover

Popular Yoruba actress, Adebimpe Oyebade also known as Mo Bimpe, recently took to her social media timeline to share a photo of her and a mystery man.   Mo Bimpe took to her IG account to share the photo and captioned it, ”Finally with the boo😍 You wanna take a guess ?Tag my baby😀👇” See her post below […]

A Nigerian man has caused reactions on Twitter after revealing he’s all ready to sell his kidney which will boost his financial status.   The young man who goes by the username @Honiitel on Twitter, took to the social micro-blogging platform to share a screenshot of a text he supposedly received from the buyer that’s in need of […]

Lady Ran Away with Boyfriend Car, iPhone 12 and emptied his bank accounts after he Caught him using her Pant for Money R!tual [Video]

Nigerian singer, Olymax, has taken to social media to raise alarm after his fiancée allegedly absconded with his car, phone and also emptied his bank account.   Olymax, in a series of posts he shared on his Instagram stories, revealed that he and the lady dated in secondary school, and reconnected again in December 2020.     […]