Nollywood actress Destiny Etiko has expressed appreciation to her fans as he hits 3 million followers on the photo and video-sharing app Instagram.

Destiny Etiko, popularly known as drama doll, shared a video of herself twerking hard with her backside and thanked her worldwide fans for supporting her brand.

According to Destiny Etiko, she is excited about the new achievement and would not have come this far in her career without the unapologetic love and support from her fans and followers. 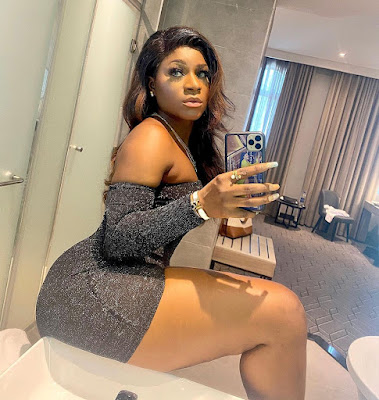 Destiny Etiko said that her fans are why she keeps pushing and is always in awe of their several beautiful compliments about her.

Kemi Filani News recalls that Destiny narrowly escaped death after getting involved in a car accident on her way from her colleague Stanley’s funeral.

Taking to her Insta story to share a video from the accident scene, a car was seen damaged and in a bad condition.

In Destiny’s words; “We are just coming back from our colleague’s burial and this is what happened.. we thank God that no one died”

A Nigerian man took a young lady to his place in Lagos for hookup but ended up regretting it after things took a strange turn. The runs girl went into a spiritual trance and started singing praises while kneeling on the bed.         In a video making rounds online showed the moment […]

Socialite, Obi Cubana and Singer, Timaya spotted having a good time together (Video)

Popular entrepreneur, Obinna Iyiegbu, popularly known as Obi Cubana has been spotted having a good time with one of Nigeria’s veteran singers, Timaya.   The CEO of Cubana Groups who have been popular due to his enormous riches received a tremendous boost to his fame after the lavish burial ceremony he held in honour of his mother. Taking to his official Instagram page […]